Why I'll never say his autism is harder than yours 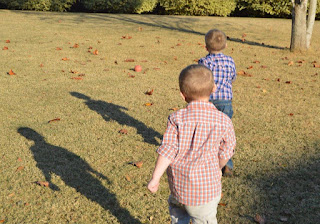 One thing that shocked me the most upon becoming a part of the autism community was the great divide and the tension between seemingly warring sides of the spectrum.  You don't have to go any further than the comments section on an autism blog to find the division and anger.  I see the derisiveness in our support groups, in our special ed classes and in our internet discussions. I see support groups separating into functioning levels, as parents with kids on opposite sides of the spectrum can't relate to one another.  Amongst parents with children on the more severe end of the spectrum there is this constant one upping.  This constant bickering over whose worst days are worse; over which child's autism presents the most challenges.  When you put it that way, it sounds crazy, right?  Are people really arguing about this or feeling slighted if their child isn't "severe enough" to be considered on the severe end of the spectrum?

Well, in fact, we are.  Maybe I should give you some context.  How many times have you heard or read:

"At least your child talks."

"Oh, he's mainstreamed some of the day?  So he's just quirky, right?"

"Well, you just don't know what it's like to have a nonverbal kid.  It's a different struggle."

"If you don't deal with aggression on a daily basis, you don't know the autism I know."

Sound more familiar now?  There is nothing wrong with acknowledging that autism is a broad spectrum and it affects everyone differently.  But when we start belittling others' struggles and day to day challenges, we start hurting our entire community.

I was reading comments on one of my published pieces the other day.  One reader said something like "The person who wrote this clearly has a high-functioning child.  They don't deal with self-harming or aggression or destruction."

Except we do deal with self-harming and aggression.  Every day.  We do have our house torn apart and things broken mid-meltdown.  The first thing I thought: How dare this person presume to know what we go through day to day based on one article, based on one day, one snapshot of our lives.

My second thought: Damn, I think I have said something like that before.  I remember a couple years ago arguing with a self-advocate and saying something to the effect of "Well, if you are sitting there typing your thoughts, you have no idea what severe autism is like.  Your opinions don't apply to ME and what MY KID goes through."

How dare I presume to know what someone else's autism is like or how severely they are affected.  That autistic adult could easily be my son in twenty years, possibly able to type his thoughts with some articulation, but also having gone through years of grueling therapy to get to that point.  They could easily be someone who can type their thoughts but still can't speak or someone who still struggles with so much anxiety they cannot leave their house.

I'm sure at some point we have all been on our side of this divide and we cringe when the other side tells us we don't have a right to feel the way we feel.  When people unfollow my page because they see a video of my son talking and they assumed he was nonverbal like their child, it hurts.  Especially as I go through his re-evaluation results this week and see that my beautiful five year old is still performing like a three year old and got "poor" or "very poor" marks in almost every category.  Don't presume to know another family's struggle.

When my friend tells me her Aspie son has attempted suicide again because he is so very aware of his differences and isolation, my heart breaks.  And it breaks even more knowing that before I knew her, I judged that side of our divide.  I thought "Are they really complaining their gifted Aspie isn't challenged enough in school and is having behavior issues?  I would love to have that problem."

There are going to be hard days and although our hard may look different than yours, I will never discount your feelings or experiences because they are different than my own.  We're all in this together and if we spent a little more time building each other up rather than ripping the other down our community could move mountains.