To Tell or Not to Tell: The Autism Parent's Dilemma

I have had a few people ask me when it was that we decided to tell our friends and family about our son's autism diagnosis and how we came to that decision.  I can't remember the exact conversation my husband and I had.  At one point, in the middle of the diagnosis process, I remember we thought the results might put him in a gray area and we talked about keeping the information to ourselves if there was any question or if his diagnosis fell into the mild category.  Or maybe we would just tell everyone early intervention was for a speech delay (like we thought ourselves early on).  But as the results from the district, the medical professionals, and the psych professionals came in, we began to realize that what we thought was a delay was actually something that would put our son in the "different" category for the rest of his life.  We had a choice.  We could explain away all of his therapies and special preschools and hope he "normaled" out by the time we had to decide special education or mainstream.  We don't live near any family, so we could just not share any of it (the diagnosis, the therapies, the progress, or the struggles) and hope that the once every couple of years we saw family that he would be further along or have a good couple days in a row.  Or we could be an open book from beginning to end.

I can't speak for my husband, but when we got the diagnosis I was relieved.  Sure, there was a part of me that was shocked, saddened, and angry.  But overall I was grateful that professionals were finally listening.  I was grateful for the doors that the diagnosis would open.  I felt like I finally had an explanation as to why every family friendly work function was a complete disaster for us.  I finally could wrap my brain around why eating, sleeping, bathing and outings were ALWAYS battles that I couldn't even come close to winning.  There was a reason behind every end-table in our house being flipped over in a violent rage.  There was a medical cause as to why our son would never sleep.  I wasn't a bad mom.  I hadn't lost my mind and completely forgotten how to get a baby on a schedule or how to plan well enough to have a successful outing with a toddler.  There was finally a reason why none of that was working and it wasn't me.

But more importantly than a reason, a cause, an excuse was the amazing realization that there was help and hope.  Once we finally had that all-mighty piece of paper with "code 299.00 ASD" written on it, we finally knew how to help him.  We finally had doors open to him for life altering therapies.  We finally knew where to start researching and how to apply all of that to make his life easier.  And as we muddled through the massive amount of research, the massive amount of literature, the unfortunate amount of garbage out there, and the like, I needed the support of friends and family.  I needed the support from others going through the same thing.  The beginning of our journey with all of its unknowns was a very scary and lonely place.  We were going through a major life event and we couldn't hide it and after the initial shock I didn't want to hide it.  I don't know where I would have been without support during that process.  As the process and the struggles went on not only did I need the support, but I wanted to give support.  I initially started my blog about motherhood, but "came out" with his ASD diagnosis in hopes that our story would reach that family at the beginning of their journey or maybe even the family that didn't yet know what they were experiencing. 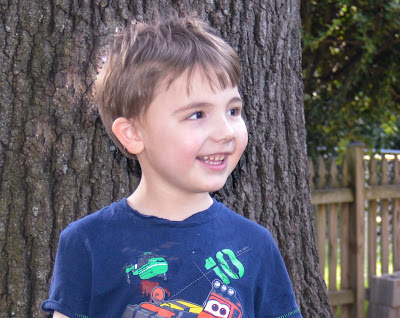 We, of course, thought about how the label would affect our son as he gets older.  But the thing is his autism is a part of him and whether we acknowledge it publicly or not, he will be seen as different from the rest.  His speech delay, his stims, his repetition, his motor delays, his sensory issues are all there with or without a label.  We maybe could have kept the diagnosis under wraps for awhile, but not for long.  Whether we tell friends and acquaintances or not, if we are doing everything we need to support him (the therapies, the special needs classes, the district services) it will be fairly obvious he is on a different path than that of his peers.

We also thought about how people may treat him differently if they knew.  And there has been some of that.  We as a family have been treated differently too, even by some of the people who were closest to us.  But there has also been an outpouring of understanding and accommodation.  When I stopped trying so damn hard to have the perfect, normal family and just started doing what needs to be done to take care of that family, everything became so much easier and so much less stressful.  Once I was honest about why we couldn't come to the base picnic or the Halloween party friends may not have completely understood, but our choices made more sense.  Once I could lay out all of his struggles with transitions, travel, airplanes and elevators most of our family understood why we don't always make the trip back home for the summer or holidays.

Sharing his diagnosis, sharing our journey is very personal.  A personal decision that some autism parents make early on, some make later on, and some choose not to share until the child can decide for themselves whether or not they want others to know.  While we have decided to share early on, I know it's to his benefit, not his detriment.  I hope when he looks back at our openness, he will be proud of how far he will have come and proud of who he is; just as we are and have always been proud of how hard he works to be successful in this world despite his challenges and with his differences.  And I hope the struggles and triumphs of his story continue to encourage, inform, and inspire.
at September 06, 2015 4 comments: