Where this Mom Stands on Politics

I figure most of America is a lot more like me than the candidates currently vying for our votes.  Most of us in America are shaped by our experiences, our upbringings and our current situations.  Our political views are no different, with each passing year and experience molding our perspectives.  And like life our perspectives become complicated and multidimensional with a whole lot of gray.  The truth is most of us can't get on board with one political party's platform, because there are simply too many extreme stances taken on a variety of issues.  Issues that we know are not all black and white.  I have never registered as a Republican or a Democrat, because frankly, I think both parties have more wrong than right.  Unfortunately in a two party system, us independents end up voting for whomever we think will do the least amount of damage, not for candidates we actually like or with whom we agree. 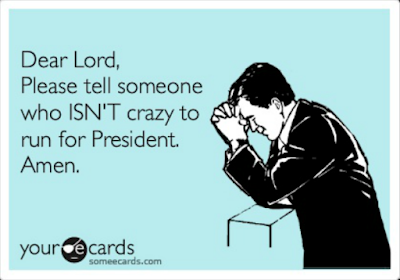 Being an unaffiliated voter, I identify with both parties on certain issues, which doesn't make me indecisive; it makes me human.


I was brought up in a hard working blue collar family.  We had a nice house, but money was tight.  There were times when hiked income taxes on my parents' hard earned money seemed like a punishment for working hard enough to make just a little extra.  There were other times that were harder, when my dad was laid off from the trade he knew during which we relied on unemployment and Medicaid for healthcare for us kids.  As an adult I stay at home with my kids and my husband makes a good living.  As a military family, we have to live in different areas with different costs of living.  We have to secure housing every time we move, which for many families means owning a house you couldn't sell and renting or owning another house you live in.  There are also a lot of costs that come with moving every 1-2 years, living away from family, and having a special needs child.  For all of these reasons we are grateful for tax breaks when we can get them.  I have seen entitlements abused and overused and get frustrated with those that see government entitlements as way of life.  But due to my upbringing and much of my extended family still living in areas where the economy is hurting, I also understand the need for taxation and the importance of government assistance (which is hopefully never looked at as a long term solution, but help getting through hard times).

I see the cuts of military dependent healthcare and lack of cost of living and housing increases for military families that have occurred under a Democratic president.  It angers me that our Vets and our military families are often getting a lower standard of care than those on government assistance.  I have also seen the waste and incompetence in military healthcare and bureaucracy in general, so I understand the public's discontent with frivolous spending that could be avoided with better organization and less waste.  But based on my military healthcare experience of three hour hold times to get in for a sick visit, medical malpractice without accountability and understaffed facilities that foster inadequate care, believe me when I say you don't want the government running your healthcare.

I see the Common Core debacle and Republicans fighting to get back to states' rights with regards to education.  I do think decisions regarding our children's education need to be made at the state level by educators and administrators not politicians with little experience as to what works best.  But I have also lived in states in which current federal regulations put in place to stop discrimination against children with disabilities are not being followed.  Neither the state nor federal government are enforcing regulations that should protect these children.  Funding is too frequently shifted away from special ed in states where our children are seen as less than.  Seeing the disparity in education across different states first hand, I understand the need for federal guidelines and federal interference in education.  I actually wish there was more federal interference in this regard, as there are so many children going without the education and intervention to which they are entitled and desperately need.

On social issues I'm personally all over the place.  But, to me, it doesn't really matter because I don't think the government should determine or care what happens in our bedrooms or at our doctor's office.  I will say I find it interesting that the more religious among us seem much more concerned with gay rights and abortion than taking care of those that need it most.  It's great if you are prolife because of your religious views, but I hope you are prolife for the duration of that baby's life.  I hope you care how they will be fed and housed if the mom doesn't have the means to do so.  Wouldn't that be the Christian thing to do?  I guess this is why I find it so surprising that evangelicals are rallying behind a man that spews so much hate and complete lack of consideration for those in our society that need compassion the most.

On the flip side, I think if one believes something is wrong or offensive, they have a right to say so.  I don't think there should be "safe spaces" set up on university campuses.  I don't buy into the idea that we all have to embrace a liberal agenda just to keep from being called bigoted or sexist.  One of the things that makes our country amazing is freedom of speech and I am afraid that the politically correct crusaders are stomping out that freedom.

How sad.  So none of these campaigns or their supporters are telling me to vote for some great person or platform.  You are all telling me you are the best of the worst.  And I (along with the rest of the country, I think) am thinking how pitiful that we think so little of our politicians that we hold them to a lower-than-decent-human standard.