What About Me?; The Story Behind Our Autism Sibling Book 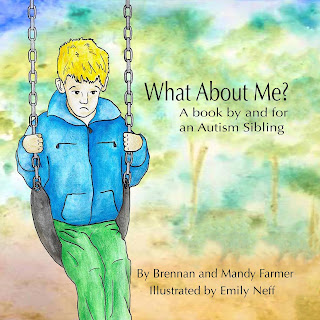 A little over a year ago our eldest son started having a lot of behavior problems both at home and at school.  He has always been our easy going kiddo and definitely the most mellow of our bunch, so imagine my surprise when I was called in for a meeting with the principal, the kindergarten teacher and a counselor to address out of control behaviors and outbursts that were occurring in the classroom.  What??  We had been seeing some emotional moments at home, but most of them seemed reactionary to living with a brother on the spectrum who has a lot of behaviors himself.


As I talked through the meeting with the school (a meeting at which they recommended therapy for him) it dawned on me that I was so busy tending to our autistic child's needs and behaviors that I had lost sight of how hard living in our home must sometimes be for a child.

"Are there problems at home?" they asked.

Wow was that a loaded question.  I explained, "Ever since the last move our autistic child's behaviors have been pretty bad.  There are a lot of mornings before school that he screams the entire time I am trying to get him ready.  He will go after me.  He will sometimes go after them.  Going from that to walking through the school doors ten minutes later, that's probably pretty hard..." my voice cracked.

His teacher spoke up, "He talks a lot about needing to be perfect and needing to do everything the right way.  He seems to get down on himself a lot.  His emotions lately have just been right at the surface and it takes very little to bring him to tears."

"He's definitely had to grow up fast and be the bigger person all of the time.  But he's usually such a happy kid.  I don't even know what to say.  We'll talk to him." 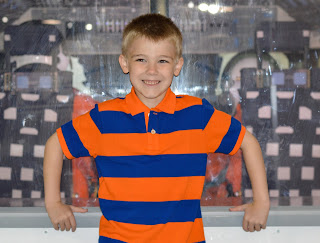 I didn't know how much to divulge. I was definitely being honest that I didn't know what had changed, but maybe that was the problem.  Nothing had changed.  For years Brennan (who is only a year older than his autistic brother) has had to hold it all together.  For years he has had to go into another room and lock the door when his brother is having a meltdown and trying to go after him.  For years therapists have come over multiple times a week to play with just his brother.  For as long as I can remember he has done everything in his power to keep the peace.  Even if that meant giving up his favorite thing or missing out on something he really wanted to do to avoid a public outing nightmare.  Even with all of that, I really thought he was handling it in stride.  He talked about knowing his brother is different and that he needs more attention and that sometimes he has different rules.  He always said he understood when birthday parties had to go a very specific way or when we couldn't watch the movie he wanted because his brother couldn't stand the sounds in it.


After talking to the school and an outside therapist I realized that although Brennan was talking a good game, there is only so much of that that a seven year old can truly grasp.  He knows things have to be different, but he won't really grasp the depth of why his brother is the way he is for quite some time.  And all of this time the resentment, anger and sadness about everything he has seen and everything he goes through have been simmering right under the surface.  He loves his brother and never wants to say when his feelings are hurt or when he is angry his brother takes something from him or hits him, because he knows it's not his brother's fault.  But that doesn't mean it's easy.

As I was looking for resources to help him understand everything he was feeling, I realized there isn't much available for autism siblings.  I saw a number of books that explained autism to siblings, but none that worked through these very real issues he was having and that I assume many autism siblings feel. 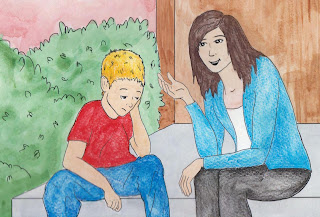 
I looked at what he wrote and some of it broke my heart and some of it made me very proud.  I told him there were a lot of other kids probably feeling the same way, but maybe they need a way to talk about it too.  He was very open to the idea of sharing his thoughts and feelings about being an autism sibling, but as we worked out some of the harder memories there were some tears.  At one point he said talking about certain memories was too painful and he got up and walked away.  He later came back to it and said he knew it was an important part of his story. 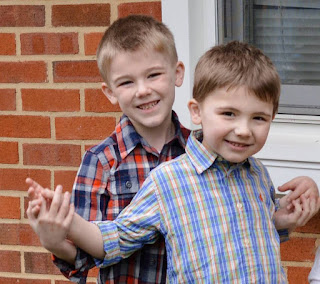 We formed his experiences and memories into a beautifully illustrated story about the up and downs of being an autism sibling.  As our illustrator Emily Neff brought the story to life, I couldn't believe how moved he was by his own story.  We kept our message positive, but we didn't shy away from the hard stuff.  We hope that What About Me? will help a lot of families that work everyday through the realities of living in an autism household but always try to see the beauty in being an autism family.  We are incredibly proud of Brennan for the person he is and the person he will be and much of that has been shaped by being an autism sibling.  We see in him compassion and empathy well beyond his years, and I am so grateful he was willing to share his story to help other kids.

Now available: What About Me? A Book By and For an Autism Sibling