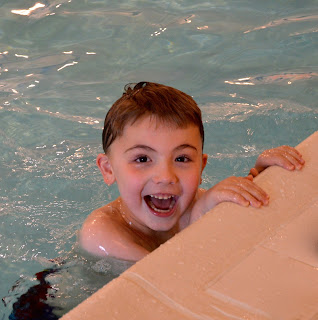 In February of last year we enrolled our son in the Sensory Swim program.  A few months after starting with them, I wrote an article about the progress I was seeing and their methodology with autistic students.  We are finishing up with Sensory Swim due to a military move and I wanted to offer up a final review of our time with their program.  Drowning accidents kill way too many autistic adults and children and we, like many autism parents, worried for our son's safety.  Along with autism, our son has a number of deficits that work against him in a traditional swim lesson setting.  He has a speech delay, so he does not always understand and process verbal instruction.  He has ADHD and needs constant engagement and reinforcement to stay on task.  He has severe dyspraxia, which affects his core strength, fine motor and gross motor skill sets.  He has sensory processing disorder, which makes him very sensitive to sounds and other stimuli, making a number of environments hard for him.  He has severe anxiety and severe separation anxiety, making any new settings or working with new people difficult. 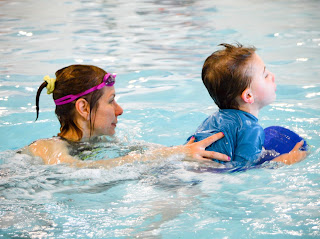 Initially I was very concerned that our son would not go with Andrew and Mary into the pool unless I was right there.  I also had a lot of anxiety myself that they would not be able to hang with him and that he might get aggressive or be too hyperactive during his lesson.  I was concerned for his safety in the water without me right there.  After just a few sessions most of those concerns were alleviated.  He enjoyed the water so much that separating from me was not that big of deal for him.  I also noticed that Mary and Andrew had a very good rapport with him and their other students.  They could not only handle his hyperactivity, but they expected it.

We watched him over a few months get much more comfortable in the water.  They only worked in the deep end so that it forced him to attempt to tread water.  He learned how to hold his breath and "blow bubbles out" when he would go under water.  He wouldn't tolerate goggles, but got more comfortable with water in and near his eyes.  I thought, initially, well even if he doesn't learn to swim at least now he understands that he needs to try to get to the ledge or something to hold on to.  I thought at least now he knows not to breathe in if his head is under water.  And with how week his core is and how rough his motor planning is (at six he still cannot pedal a tricycle) I really did not expect much more. 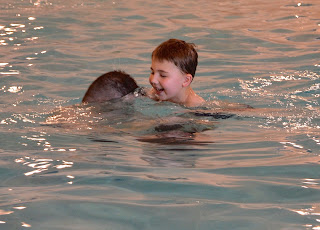 Over time though, he started going a few inches further each time.  At first they would propel him and wait for his natural instinct to take over.  As he started getting a feel for it, over multiple sessions, they would back up further from the wall and encourage him to paddle heard enough to get to the wall.  They worked with him on kicks and paddling his arms separately as he couldn't seem to do it at the same time.  But eventually, he started kicking while he was paddling.  Once he got a little stronger and a little more sure of himself they would have him jump to them in the water.  They would back up a little more each time and he didn't seem to even realize that he was swimming.  He built on this and before long was swimming the width of the pool without any assistance.  It was really an amazing progression to watch.


After using Sensory Swim for about 15 months and observing them with my son and other children these are the things I like:  They don't shy away from harder cases or kids that hate the water and they go at the child's own pace and validate the child's anxiety.  They work with all age groups and meet the child where they are developmentally.  They know how to work with nonverbal, hyperactive and aggressive children (many swim programs won't even consider teaching children with these issues, regardless of their disability).  They use the deep end (where they can still touch but the children can't) for lessons and this seems to force the issue for kids who would otherwise be hesitant.  Once the child is starting to get it they give the child space to be independent in the water.  They will stay close by for safety purposes, but they will stay out of sight lines, thus encouraging the child to do it on their own.  Mary and Andrew are teaching seminars, printing materials and books, and answering questions for anyone who cannot get lessons with them but wants to know their methods.  They genuinely want to help our community and lessen the number of autistic children dying in drowning accidents every year.


I wish that Sensory Swim was available in more areas of our county as I truly believe they have the right attitude and methodology to help so many in the autism community learn to swim.  Because they have so much experience with special ed students and travel weekly to help as many families as possible, their lessons are more expensive than traditional group swim lessons making their program less accessible for some.  But for us, the proof is in the results and it was totally worth it.  I cannot put a price on one less thing to worry about when it comes to my autistic son's safety.
**I have not received any compensation, products, or services in exchange for this review.  I simply want other families to know what worked for us. 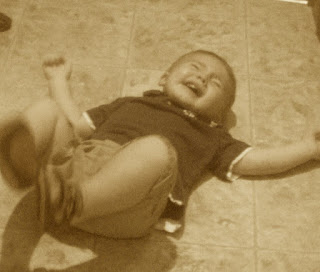