I was the parent who would never medicate my child; until I did.

Of course when I would talk about this I wasn't thinking about abstaining from medication needed to treat a disease or illness. I was talking about the other medicating. The medicating that still has a stigma attached to it. The stigma that perpetuates the idea that parents who medicate their kids are lazy or don't know how to discipline their children. The stigma that has kept me from writing about this decision until now.

Part of me blames that stigma for my bias. Another part of me recognizes that my preconceived notions were based in my own lack of understanding of mental illness. Even after witnessing our son's inability to sleep, hyperactivity, compulsiveness, anxiety, mania and aggression, we were hesitant and scared to talk to the doctor about medication. 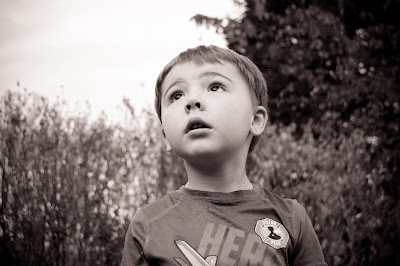 Were we closing doors for him? Were we giving up on therapy? Was there any other way? Would meds change who he was? Could they hurt him? Were we taking the easy way out? Was it healthy to continue on without medicating?

With him only sleeping three hours in a 24 hour period most days and with his anxiety so high it was literally crippling him from functioning, we knew we didn't really have a choice. As his aggression spiraled out of control and therapy was so limited, we knew it was the only way to keep everyone safe. And so we chose to medicate.

There is no magic pill. Even after choosing to medicate, he still works so very hard to overcome the challenges autism and its accompanying conditions present him. He still struggles with anxiety and compulsiveness. He still has and progresses in hours of therapy every week. Even after accessing quality therapy, he was struggling with issues therapy could not address.  We didn't give up on therapy. We didn't give up on him.

Medication did not change him; it helped him. I do not regret the choice and hope that he won't either. And looking back at his pained gaze in moments that his anxiety and senses were assaulting him; looking back at manic episodes that had his blood pressure through the roof; looking back at his absent stare due to another 28 hours of continuous wakefulness; my only regret is not helping him sooner.

He still is a very active little boy. But now he can play with his little sister and I don't fear for her safety. He still jumps and flaps and has an unmatched excitement for life. But now he can go to a new place without shutting down or melting down from fear of the unknown.

I was a parent who would never talk or write about our son's mental health issues, but now I am because it needs to be said and needs to be heard.